Selling out tickets in literally seconds, get ready for one of the year's most emotional live shows as Lewis Capaldi embarks on the "Broken By Desire To Be Heavenly Sent" North American tour in support of his soon-to-be-released new album. The man behind global hits "Someone You Loved" and "Before You Go" which both sent the world into an overdrive of tears, Lewis Capaldi is set to continue breaking the airwaves with highly-relatable tunes for every mood to a 'hellish extent in a 'heavenly sent style. Catch him perform his biggest hits and new tracks live on stage at Arizona Financial Theatre on Saturday, May 6th of 2023 by booking your tickets now! 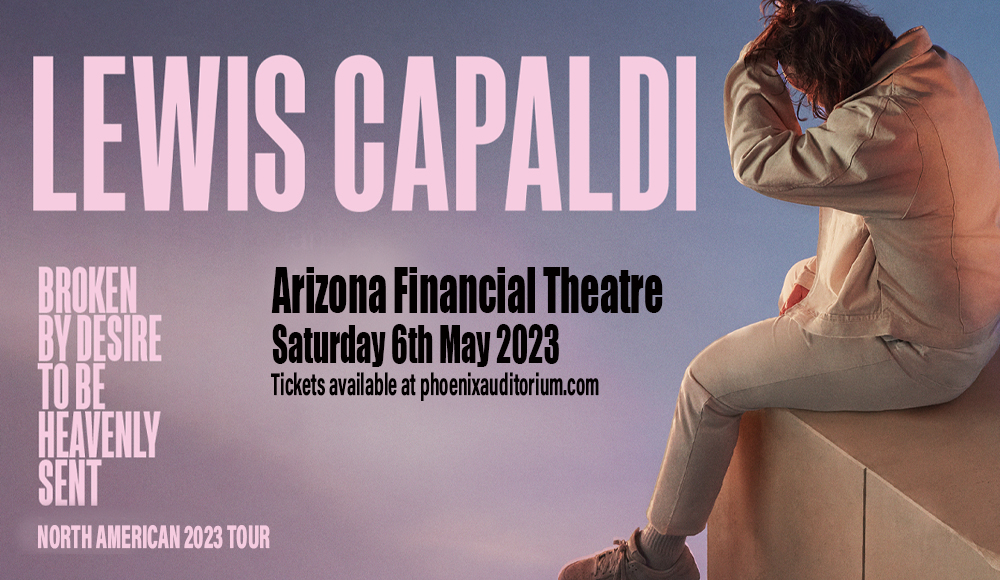 Breaking through the global stage for his #1 hit single "Someone You Loved" in 2019, Lewis Capaldi made a mark as the first artist to sell out an arena tour before his debut album officially dropped. With a massive following for his highly-relatable songs that send listeners to tears, Capaldi became a much-loved artist for his authenticity and lyrical vulnerability which speaks volumes.

With his emotional global hits "Someone You Loved", "Before You Go", and "Bruises" has dominated the airwaves, causing an avalanche of tears to occur, Capaldi is set to drop new material, sharing that "the songs I want to write are emotional songs, about love or loss."

As a taste of the new record before its official release on May 19th, Lewis Capaldi recently shared "Forget Me", the lead single of his new album "Broken By Desire To Be Heavenly Sent". With the album in the works since 2020, and even taking a break from social media to focus on his lyrical and production magic, Lewis Capaldi is finally ready to share new tales and melodies for the world to shed tears along with.

"I felt like I was sounding better because I was just chilled out in my own gaff," Capaldi shared. "I don’t want to create a new sound for myself, or reinvent myself. The songs I want to write are emotional songs, about love or loss."

In an interview about his hit single "Someone You Loved" to which he said was inspired by "losing people in different forms", Lewis Capaldi shares "I wanted to keep it quite broad because I wanted people to apply their own stories. That’s one of my favorite things about the song is so many people come up to me and say, ‘This song means this to me.’"

As an artist who desires to have people come together and place their own stories to his lyrical crafts, Lewis Capaldi's formula has never failed to create a spark and cause an avalanche of tears and relatable emotions across the world. With "Broken By Desire To Be Heavenly Sent" right around the corner, fans can expect the Capaldi-signature formula to send them to tears once the new tracks hit the global airwaves.

Don't miss out on the North American leg of the Broken by Desire to Be Heavenly Sent tour by booking your tickets now!