Setting foot on a journey of 'more love and less ego, the award-winning Nigerian singer Wizkid is coming back for a headlining 2023 North American tour this spring in support of his new record "More Love, Less Ego". The man is gearing up to set foot live on stage at Arizona Financial Theatre on Thursday, 6th of April 2023. His new album features his strikingly awesome new singles "Mood" feat. Buju, "Money & Love", and "Bad to Me". Highly acclaimed as one of the most influential African artists and for his prominence in the Afrobeats scene, you definitely can't miss out on Wizkid's live shows this spring. Book your tickets now! 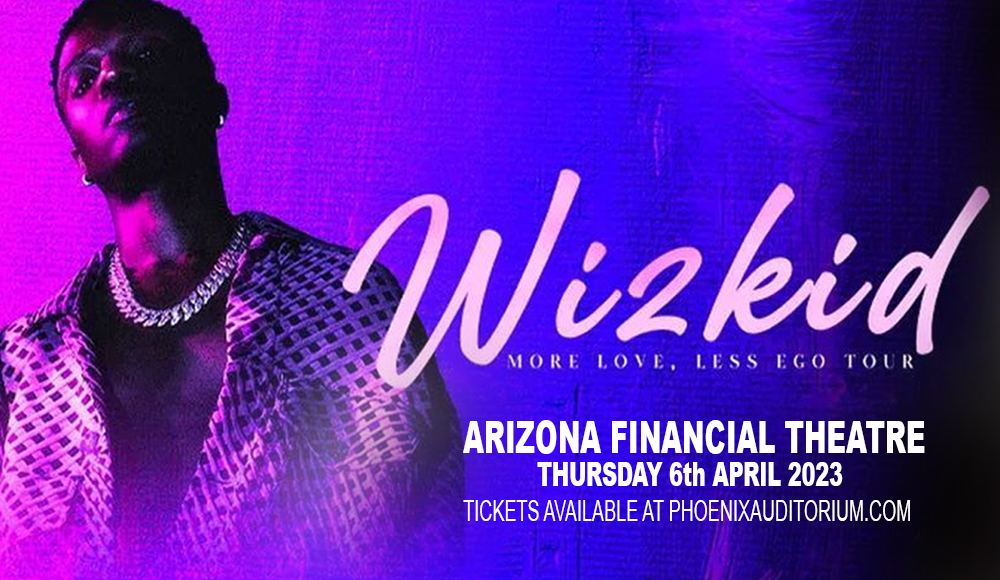 With big hits, raving fans, and a new album up his sleeve, Wizkid just came fresh from a memorable sold-out show at the legendary Madison Square Garden. He's the second Nigerian artist to headline and sell out the iconic venue in NYC.

Gaining prominence after his collaboration with Drake for his international #1 hit single "One Dance", Wizkid's artistry of blending elements of Afrobeats, R&B, dancehall, and reggae in his records found itself conquering the international music scene. His third studio record and major-label debut "Sounds from the Other Side" includes his hit single "Come Closer" featuring Drake. The album features collaborations with various artists including "Daddy Yo" featuring Efya, and "African Bad Gyal" featuring Chris Brown.

With big hits, sold-out tours, and a raving fanbase, Wizkid has become regarded as one of the most influential African artists to ever exist. He's also become a highly influential figure in the modern Afrobeats scene. His single "Essence" became the first Nigerian song to take a place on the Billboard Hot 100, hitting #9 on the chart after a remix by Justin Bieber.

Wizkid has become the most awarded African artist for his Grammy Awards and nominations, Billboard Awards, iHeartRadio Music Awards, MOBO Awards, and more. He also takes recognition from the Guinness World Records for the first song to reach a billion streams and the most streamed song on Spotify. He is also named among the Top 100 most influential Africans list by New African Magazine.

As "More Love, Less Ego" makes rounds in the global airwaves, fans definitely can't get enough and are itching to party, rave, and vibe to his new songs and biggest hits live on stage on a headlining tour. Don't miss out on the More Love, Less Ego tour this spring by booking your tickets now!